April 7 th 2009 Comments Off on Malvolio’s Revenge – Recent Decision of the Supreme Court of Illyria
Share
Posted in:

Malvolio’s Revenge – Recent Decision of the Supreme Court of Illyria

While Worldlii covers many jurisdictions, it missed last night’s decision in Malvolio v. Olivia argued before the Supreme Court of Illyria. [Nothing to do with Marmont’s division of the Illyrian territory into 96 cantons, each with a justice of the peace. The rest of the judicial hierarchy consisted of 11 Tribunals of First Instance and a supreme court of Illyria – see Napoleon and the transformation of Europe by Alexander I. Grab at 191.]

Shakespeare apparently missed out the denouement of the story of Twelfth Night, where Malvolio did not go sheepishly to gaol, but responded by suing Olivia and her retinue and won ten million dollars in damages for false imprisonment, violation of constitutional rights, and intentional infliction of emotional distress. But Olivia appealed, to the Supreme Court of Illyria.

The jury finds all six defendants jointly and severally liable for $10,000 in actual damages and $10,000,000 in punitive damages. In an intermediate appeal, the verdict is affirmed without opinion. Illyria’s highest court grants the defendants’ petition for a writ of certiorari. Because Illyrian choice-of-law rules for tort suits require application of the law of the jurisdiction where the parties’ counsel are licensed to practice, the Constitution and laws of the United States, including 42 U.S.C. § 1983 and the Restatement (Second) of Torts, provide the rule of decision for Malvolio’s legal revenge

Illyria’s highest court heard argument on whether the punitive damage award is constitutionally permitted, and whether the following are liable to Malvolio: (1) Maria, Toby, Feste, Andrew and Fabian, for intentional infliction of emotional distress, false imprisonment, violation of constitutional rights, and conspiracy for all three of these torts; and (2) Olivia in her official capacity for all of her subordinates’ conduct, and in her individual capacity for false imprisonment and constitutional violations.

The Court by a 6-1 vote, struck down a $10 million damage award which a lower court had given to Malvolio, Twelfth Night’s officious Chief of Protocol, against his employer, Lady Olivia, for false imprisonment, intentional infliction of emotional distress, and Constitutional violations. The Court let stand a $10,000 award Malvolio had won against Olivia’s servants and agents, Maria, Feste, Fabian, Sir Andrew Aguecheek and Sir Toby Belch, all of whom, being drunk, foolish and/or impecunious, are also judgment-proof.

Here is an extract from the DC Theatre Scene report:

As is frequently the case with appellate courts, the lawyer’s issues were sidetracked by questions which the judges thought up. When Clement thundered “Malvolio has been denied justice for four hundred years”, Justice Breyer inquired as to what the statute of limitations – the maximum time after an incident in which to bring a lawsuit – was in Illyria.

“I’m disappointed,” Judge Douglas Ginsburg of the D.C. Court of Appeals confessed. “I had assumed the four hundred years was the result of the Judicial process.”

“Only the last hundred fifty years,” Clement assured him.

In the end, though, Englert and Olivia carried the argument. The sole dissenter, D.C. Court of Appeals Judge Brett Kavanaugh, would have found Olivia liable but would have reduced the punitive damages award from $10 million to $20,000. The Judges had a wide range of reasons for finding for Olivia. For example, Justice Breyer observed, “I just don’t like Malvolio.” And Judge Collyer considered Olivia to be as mad as Malvolio, pointing out that she spent much of the record in passionate pursuit of Viola, thinking she was a man, and ended up marrying someone she barely knew and thought was somebody else. “She needs help,” Collyer observed.

It fell to Breyer to pronounce why Malvolio fell victim to such a base prank and then left the Courtroom with scarcely any loot. “Malvolio,” the Justice observed, “suffers from what we do not. He doesn’t have a sense of humor.”

Justice Ruth Bader Ginsburg served as the chief justice of the Supreme Court of Illyria, which heard arguments over whether Malvolio could collect $10 million in punitive damages from Olivia. Ginsburg wore a bright red tie, noticably absent during real Supreme Court sessions, against her black robe.

To her right sat Justice Stephen Breyer, who explained why he believes Olivia owes Malvolio nothing. “I don’t like Malvolio,” Breyer said, quite unjudiciously.

Justice Samuel Alito, sitting on the other side of Ginsburg, quipped, “I always wondered what active liberty meant.” He was referring to Breyer’s book of the same name that propounds his theory of a Constitution with a meaning that changes over time.

The others on the panel are appellate and trial judges in Washington.

Experienced Supreme Court lawyers Paul Clement, the former Solicitor General, and Roy Englert, argued on behalf of the characters from one of Shakespeare’s most popular comedies.

Reaching back to a real-life drama, former President Bill Clinton’s sexual relationship with White House intern Monica Lewinsky, Englert assured the court that the case does not depend on “what the meaning of the word is, is.” 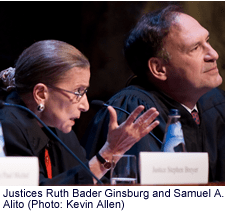 The State of Global Legal Regulation

ODR Is No Overnight Sensation