Readers of Slaw may have come across the small volumes that have been published annually for over sixty years – the Hamlyn Lectures. They resulted from an application for directions before Mr. Justice Wynn-Parry of a Trust resulting from the Last Will and Testament of Miss Emma Hamlyn. They’re delightfully accessible general talks on various aspects of English and comparative law.

And the older volumes of the series are now available from the University of Exeter Law School website. CUP is publishing the current volumes.

“upon trust to apply the income of the Trust Fund in the futherance by lectures or otherwise among the Common People of this Country of the knowledge of the Comparative Jurisprudence and the Ethnology of the Chief European countries including our own and the circumstances of the growth of such Jurisprudence to the intent that the Common People of our Country may realise the privileges which in law and custom they enjoy in comparison with other European Peoples and realising and appreciating such privileges may recognize the responsibilities and obligations attaching to them.”

That legacy has had quite a result. Slaw readers might enjoy Chief Justice Bora Laskin on The British Tradition in Canadian Law over the New Year. 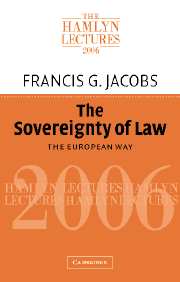