The Most Important Book on Statutory Interpretation Since 2000 – Yes But…

On June 15, our friends at Eagan published a brilliant and in some ways strange book that should be in every law library, since it is (as my headline says) the most important book on statutes this millennium: Reading Law, The Interpretation of Legal Texts. Its strangeness is due to the identity of its authors – the fiercely intelligent and challenging Justice Antonin Scalia the senior justice of the US Supreme Court , and the leading legal lexicographer of our time, Bryan Garner of LawProse in Texas.

As in any work by Bryan Garner, there are lots of knotty problems to unravel:

Is a burrito a sandwich?

If you trade a gun for drugs, are you “using a gun” in a drug transaction?

Do legal documents change their meaning over time?

Are judges empowered to update them as they see fit?

Is the written Constitution the only Constitution, or is there another one that exists outside the text?

Does judicial power include power to legislate?

Do legal instruments have a “spirit” that can override what the words say?

If an old statute is still on the books but hasn’t been enforced for decades, must judges treat it as valid law?

Does a legislature that enacts a law really have a collective “intent”?

What does the law consist of, anyway? An unenacted intent or an enacted text?

To what extent should judges depart from the letter of the law? Should they ignore the text when necessary to achieve favorable consequences for certain targeted groups of people, such as minorities, women, factory workers, the poor, homeowners, businesspeople, tenants, landlords, taxpayers, government workers, Indian tribes, children?

Does it make a difference if judges are elected?

What does it mean to interpret a law?

Are all laws interpreted, or only ambiguous ones?

In law, do words really have any meaning?

One could build an entire law school around debating the answers to such questions. This is a book that would be useful to lawyers or judges of any age and stage. Why then did I find it frankly irritating?

This is not quite a grand theory of interpretation and the judicial role. There are really three books jostling for breathing space in this volume: the most useful in Chapter II is a careful exegesis of the canons of interpretation divided between Principles Applicable to All Texts and those that Apply Specifically to Governmental Prescriptions – and in fact to governmental prescriptions within the American constitutional system. The first part could be read by lawyers everywhere, the second is for the most part particular to US law.

The most entertaining is the introduction, which features prominently Justice Scalia’s no-holds barred articulation of his approach to deciding cases and reading texts.

The final book is a rather idiosyncratic list of texts consulted – all of the references to which clutter up the book’s index. Canadian legal interpretation writers like John Mark Keyes and David Kilgour both show up, but you won’t get anything other than a citation. Why an index would just repeat an alphabetical list of author surnames is beyond me.

So how would the authors read a legal text? Their preferred approach is described as textualism –

“We look for meaning in the governing texts, ascribe to that text the meaning that it has borne from its inception, and reject judicial speculation about both the drafters’ extratextually derived purposes and the desirability of the fair reading’s anticipated consequences.”

As Justice Scalia wrote in 2005

So forget about sections like An Act shall be interpreted as being remedial and shall be given such fair, large and liberal interpretation as best ensures the attainment of its objects. Textualism has been Justice Scalia’s approach of choice since joining the Supreme Court Bench in 1986. Not that (with the possible exception of Justice Samuel Alito) he has convinced many of his colleagues of the merits of his position. Textualism is a flexible doctrine:

In textual interpretation, wrote Scalia in 2005, “context is everything,” and when it comes to the Constitution, he stresses:

…the Constitution tells us not to expect nit-picking detail, and to give words and phrases an expansive rather than narrow interpretation — though not an interpretation that the language will not bear.

Legal works of joint authorship are always a little odd. One is never entirely certain whether both authors agree on everything, having debated each point until exhausted. Or whether each chapter has a primary drafter. In their last collaboration, Making Your Case, the Art of Persuading Judges, they took different stances at pages 114 and 129. In Reading Law, the signals are more subtle but the number of footnote references to Scalia,J., dissenting, make it fairly clear that old scores are being settled. One somehow doubts that the lexicographer author would be quite as adamant in saying that there is no constitutional justification for judicial law reform, that Roe v. Wade is nebulous (page 345) and that words must be given the meaning they had when the text was adopted (page 78).

Straw men are set up and windmills tilted at – I won’t say who is Sancho Panza. The discussions of Ronald Dworkin at page 12, Herbert Hart at 36 and 219, Joseph Raz at 95 and Hans Kelsen at 95 are caricatures that verge on travesty. Amazingly, for a work about meaning and language, Wittgenstein goes without mention as does Richard Robinson and both the J. Austins. The authors are no fans of legal realism and Karl Llewellyn gets trashed at 59.

Canada gets the odd mention, with Randal Graham at 81, Alex Corry at 108 and 378, and Elmer Driedger at 125, 203 and 213. Ruth Sullivan gets not a single mention and Pierre André Coté a nod in the bibliography. The Rogers Cable Million Dollar Comma is discussed at page 163, and the authors note that the unambiguity of the French text decided the case in Rogers favour.There are discussions of Chisholm J’s judgement for the Nova Scotia Supreme Court (which we would now call the Court of Appeal) in Heatherton Coop. v. Grant [1930] 1 DLR 975.

The book is beautifully produced with a very attractive font – Adobe Caslon – and has been very professionally edited. It’s a steal at $49.95, and should belong in every library. 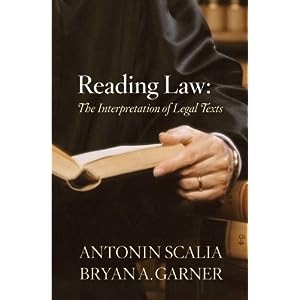 I did discover one bit of sloppy proofreading – on pages 350 and 445, an English case, British Amusement Catering Trades Association v. Westminster City Council [1987] 1 W.L.R. 977 is referred to as a decision of the House of Lords ([1989] AC 147), rather than the Court of Appeal, even though the judgment referred to is of Balcombe, LJ – and the plaintiff’s name is misspelled as British Assessment Catering Trades Association.

On page 121, Augustus De Morgan’s Theorem is dropped into a discussion of a drug property forfeiture case, with no explanation

On page 196, the authors disagree with a British Columbia Court of Appeal case from 1969, R. v. Markin, arguing that Tysoe JA got it wrong in interpreting the word “Ordinance”. But the Markin case is all about whether one can properly take judicial notice of a proclamation. And the Court of Appeal acquitted a motorist of driving while disqualified because the Lieutenant Governor in Council’s Proclamation of the statute hadn’t been conclusively proved.

This isn’t a book that one can recommend as wholeheartedly as Bennion’s. As I read it I got irritated by the one sided nature of some of the points made, and the certainty of the rightness of at least one of the co-authors’ views.

The disclaimer may make one smile:

The views expressed in this book are those of the authors as legal commentators. Nothing in this book prejudges any case that might come before the United States Supreme Court.

Of course, but equally any reader of the book will know exactly where Justice Scalia stands and how he would approach any question of interpretation. A great achievement, Reading Law, The Interpretation of Legal Texts, but these views are not to be approached uncritically. 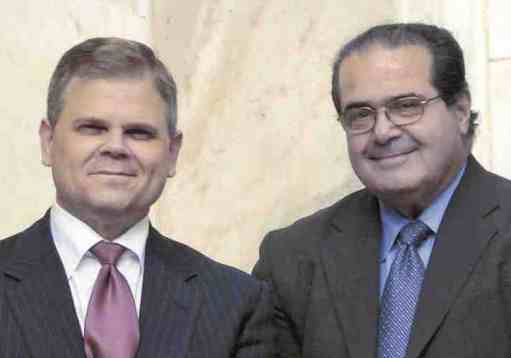