You may have noticed that, as of January 2016, the online federal statutes look quite different. According to the announcement, these changes were made to improve the readability of the legislation:

Different styles and sizes of fonts are used to give greater prominence to certain elements and to help direct readers’ eyes more easily through the text. The structure of the legislative text (headings, sections, subsections, paragraphs, etc.) has been made more evident in order to improve readability.

Because headings and sub-headings are larger, they are more noticeable, helping readers to find the information they are looking for, and their sans-serif font helps draw the eye down to the body of the text.

The use of a font with a serif for the denser body of the text helps draw the eye along the length of each line and helps readers distinguish similarly-shaped letters.

Studies that show typography affects retention of information and perception of the quality of information. Errol Morris ran a study on The New York Times website, ostensibly to determine whether readers were optimists or pessimists, but in reality to find out if typeface affected readers’ acceptance of a statement. Of the six typefaces Morris used (Georgia, Helvetica, Trebuchet, Comic Sans, Baskerville, and Computer Modern), he found that readers who saw the statement in Baskerville were most likely to agree with it.Other studies have shown that readers perceive a link between the ease of reading a typeface and the ease of the task it describes:

Another consideration is there is a difference between reading in print and online. Some typefaces are more readable on paper than a computer (and vice versa). In Getting it Right with Type, the author recommends using sans serif typefaces, since on low-resolution screens, small serifs become larger thicker serifs, creating “visual noise.” Verdana (a sans serif typeface) and Georgia (a serif typeface) are recommended since they were designed to be legible on screen.

Judgments on CanLII vary as to font they are in, but does that affect the perception of the user reading them? Certainly the typeface used affects the ease of reading; compare the first example with the second: 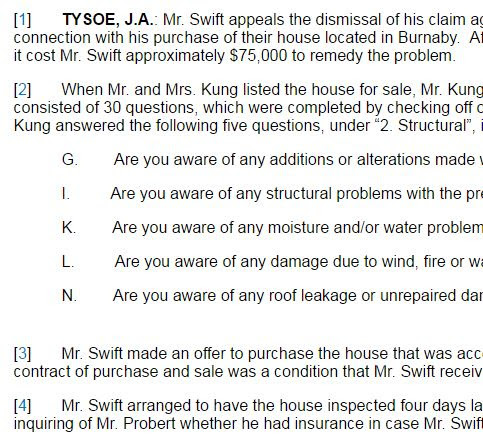 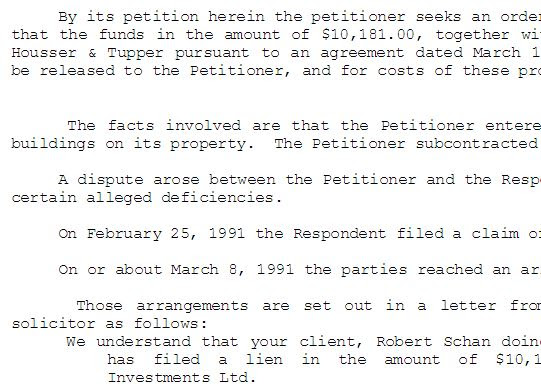 Matthew Butterick’s Typography for lawyers deals not just with selection of font (although this is a subject that Butterick is very passionate about) but also with the general layout of documents. Among Butterick’s tips are:

Some courts have stated requirements for font. For example, the British Columbia Court of Appeal requires the use of “12-point Arial font for all text, including citations and footnotes.”

What are the implications for librarians and legal researchers? From a librarian’s point of view, we want to make sure that the information we give library users is as easy to understand as possible. Obviously we have no way of changing the typeface in a book, but if we have a choice of formats in which to provide electronic versions of case law, we should choose the most readable format.

Similarly, when librarians create their own content (for example a “how to” guide or an annotated version of an act), although the information remains the key element, how this information is presented affects how it is perceived and how well it is understood.

Big New Ideas: The Best Gig for a Legal Marketer