Thanks to Jon Smithen for a link to a BBC piece discussing the availability of The Proceedings of the Old Bailey, 1674-1913, which is a fully searchable edition of the largest body of texts detailing the lives of non-elite people ever published, containing 197,745 criminal trials held at London’s central criminal court.

The site is fascinating, although I would advise North American readers of Slaw to look at the site in the evening, since there is so much traffic from British researchers that the site is crashing.

A conference on the use of these resources is planned for later in the Spring. 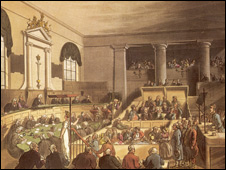