May 14 th 2012 Comments Off on The Case That Keeps on Giving
Share
Posted in:

The Case That Keeps on Giving

While significant in clarifying the defence of necessity in criminal law, Regina v. Dudley and Stephens has had an even larger cultural influence.

That’s the case of the Mignonette, which capsized on its way to Australia and whose shipwrecked crew faced tough choices in an under-provisioned lifeboat.

The latest NYT Best Seller list features a new book The Lifeboat by Charlotte Rogan – the author tells that her inspiration came from her husband’s criminal law text.

What hooked me was stumbling on my husband’s old criminal law texts and reading about the cases of sailors who survived shipwrecks and then were put on trial. I’ve always been interested in political philosophy and the idea that people create society out of a state of nature. I was inspired by Hobbs and Locke and Rousseau — and by the idea that people make rules and give up certain freedoms for security. So in the boat I had people in a state of nature. I had people facing these extreme situations and explored how their miniature society evolved.

The fact that Rogan sets her book just before the Great War suggests that she might have noticed a recent centenary of a notable shipwreck. If you haven’t seen the computer animation of The Titanic, Titanic, you’re in for a treat.

Here is the NYT interview with the author NYT Podcast Last year, Osgoode’s own Allan Hutchinson wrote on a handful of classic cases,

While Allan tells the tale well, he rests heavily on the late Brian Simpson’s Cannibalism and the Common law, in which Brian actually enlisted as a seaman to understand the traditions of the merchant marine. 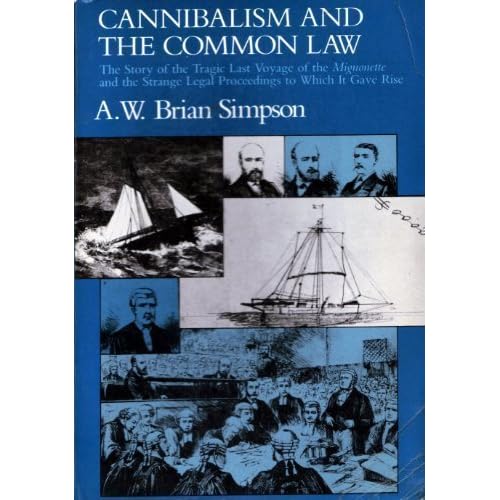 But Dudley and Stephens influenced writers as far back as Joseph Conrad and Lord Jim.

And as Wikipedia pointed out, the case itself seems to bear an extraordinary resemblance to a classic Poe story:

It became better known in 1974 when Arthur Koestler ran a competition in The Sunday Times, in which readers were invited to send in the most striking coincidence they knew of. The winning entry pointed out that in Edgar Allan Poe’s novel The Narrative of Arthur Gordon Pym of Nantucket, published in 1838, decades before the Mignonette sank, four men are cast adrift on their capsized ship and draw lots to decide which of them should be sacrificed as food for the other three. The loser was the sailor who had proposed the idea: the character’s name was Richard Parker.

Richard Parker was the name of the unfortunate cabin boy whose slaughter prompted the trial.

Eleven years ago, Yann Martel in Life of Pi picked up on these occurrences, surmising “So many Richard Parkers had to mean something”, and included a shipwrecked tiger by the name of “Richard Parker” in the book.

The case was also the basis for an infamous Monty Python sketch, titled “Lifeboat (Cannibalism)/Still no Sign of Land“. In that sketch, five sailors are castaways on a lifeboat after a shipwreck, and the only way they can survive is through cannibalism. Once they decide whom to eat—and which body parts—a waitress is called over to take their orders, complete with vegetables. Python

Back to the appeal from Baron Huddleston, in Regina v. Dudley and Stephens where Lord Chief Justice Coleridge speaking for the court said words which betray a certain moral humbleness:

We are often compelled to set up standards we cannot reach ourselves, and to lay down rules which we could not ourselves satisfy.

By the way, Captain Tom Dudley and Seaman Edwin Stephens had their sentence commuted by the Home Secretary Sir William Harcourt – they served six months.